In September I found myself with a chance to take some leave, and the opportunity to make use of a Maui Campervan, so I grabbed my good friend Lynne and we headed South….

I arrived in Christchurch on Wednesday night, but Lynne wasn’t flying in until Thursday morning, so I made a short but winding trip out to Akaroa to spend the night. In the morning I spent some time at the famous little shelter on the pier, to watch the sunrise. Photography was tricky as there were lots of boats moored very close to the pier, which were moving around while I was trying to take a long exposure. Nonetheless I managed to get a few shots I was happy with.


After picking up Lynne from the airport, we drove to Aoraki/Mt Cook National Park, where we basically had no luck at all! There for a day and a half, but it was drizzly the whole time and Mt Cook was completely hidden by cloud. To console ourselves, we headed to the bar for hot chips and beer. Once we returned to the camper, we watched with slight concern as a man tried for several hours to break into the car parked next to us. We assumed it was his own car, with the keys locked inside, but we weren’t brave enough to ask him! When we woke up, the man was gone but the car was still there.

With not much sunrise luck on Friday morning, we decided to move on somewhere new. On our way out of the national park, the weather finally started to lift, and we got our first glimpse of the majestic Aoraki.

We decided to head for St Bathans, which was somewhere I had never been before and really wanted to visit. We took our time, stopping to climb a big hill in Lindis Pass for a bird’s eye view, to admire the beautiful Clutha River, and see some cherry blossom trees in Alexandra. Also in Alexandra we stopped at a café where I had the most divine iced coffee ever, along with a traditional Southland cheese roll. That cafe is totally on my list to return to!

We arrived in the historic goldmining town of St Bathans in the late afternoon, and I was instantly in love with the tiny township, its hundred plus year old houses, the gorgeous Vulcan Hotel (which people say is haunted), and the absolutely beautiful Blue Lake. Lynne and I spent some time on the cliffs around the lake taking photos, before retiring to the pub for chips and beer (a pattern was forming here!). I was less worried about the ghosts, and more concerned that we would come to some strange fate at the hands of the most unfriendly and downright strange “publican” I have ever met. Turns out the lady has quite the reputation as several people asked me if I had met her when I shared pictures of St Bathans.

DAY 3 – St Bathans to Dunedin, via the Catlins!

After sunrise at the lake, and a bit of time exploring the areas along the shore, we again jumped in the van and headed south. Lynne and I have a bit of a history of making up ridiculous car games, and this time we decided on a competition to spot the polling booth in each town we drove through, as it was the day of the election. It’s amazing how competitive and passionate two grown women can be when there aren’t small childrens’ feelings to consider! Our journey took us through southland to the Catlins Coast. We visited my favourite waterfall in the country, Purakaunui Falls, along two others – Matai Falls and the impressive multi-tiered McLean Falls. I still don’t have a shot of McLean I am happy with, which means I will just have to go back! 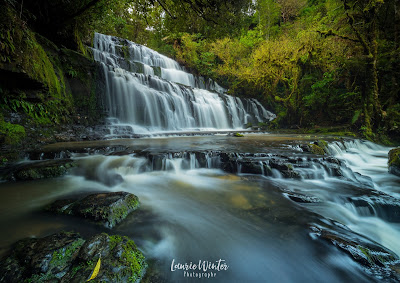 Sunset was at Nugget Point Lighthouse, with a stop on the way for another delicious cheese roll (a new pattern was forming!). At the lighthouse, the skies revealed a little soft pink, and I met a lovely man who recognised me from Instagram. We then pushed through to Dunedin for the night.

Dunedin forecasts showed strong winds for the next morning, so we drove around to Hoopers Inlet, in the hope that the bay would be sheltered. Thankfully it was! The conditions were perfect with a calm sea but moving clouds. ** Edited: I was so glad I took the opportunity to photograph the lovely boatshed here, as it was destroyed in a storm in February 2018.


After the epic drive of the day before, we had a more relaxed day exploring Dunedin, and eating more cheese rolls. We took in the University buildings, along with the railway station, and enjoyed a relaxed coffee in the botanic gardens with friends of Lynne’s. Afterwards we visited Tunnel Beach, but shortly before sunset decided that the light was looking better further south. We parked up in a lovely spot at Ocean View Beach, and watched crazy clouds form. Was totally the right decision as looking north back to Tunnel Beach, there was little action going on. After sunset we made the drive north to Moeraki, for an attempt to photograph the boulders for sunrise.

Photography at the boulders was a bit of a disaster – miserable weather and high tide ruining the fun. We did however have a flask of mulled cider that we had brewed the night before to warm us up, so all was not lost*. After sunrise we packed up, and made the not-very-exciting drive back up to Christchurch.

After this trip, I decided my time is best spent doing photography trips in autumn and winter, as spring conditions are just too variable. Let’s see what the next trip holds!
* We did actually eat some healthy food, and we didn’t have alcohol for breakfast every day

As usual, if you want to see more of my work, please visit Laurie Winter Photography
You can also subscribe to my blog for post notifications in the box on the right hand side menu.